Showing posts from November, 2012
Show all

I Got the Music in Me 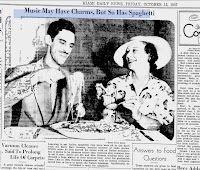 My grandfather was the Music Director for Miami radio station WIOD from 1929 until 1952. He attended Yale's music conservatory and claimed to have graduated in 1924 although Yale seems to have forgotten about all but his first two years. He was a concert pianist, composer and crooner and evidently relatively famous as newspapers from his hometown of New Haven to Miami carried the locations of his daily whereabouts from where he played, to what he ate for dinner. Earle Barr Hanson was a Star. I met Earle about 3 years ago through Google's digital newspaper archives. It's a shame that they've cancelled the project because I still have so many questions. What happened to Earl's manuscripts? Did he publish? Did he record? According to the Miami Daily News, his career began with an Italian orchestra which somehow translated into spaghetti cravings, yet the photo from this article would lead me to believe that he'd still not mastered the fork. Maybe he was really h
2 comments
Read more

November 15, 2012
Today wasn't one of my better days; it wasn't one of my worst either, but as is the tradition in the Hanson-Hunnicutt household I thought we'd play a little round of internet high-low. "High-low" refers to an end-of-day round robin with whomever happens to be at the dinner table. The object is to recount the best part of your day: your "high," and the lowest part of your day: your "low." Walt adds another dimension in that he asks himself who he was at his best and who he was at his worst and then strives to do better the next day. Walt has better Karma. It's 5:28pm CST as I write this and so my day isn't over but I'm not reading anymore email tonight, I have a nice cold glass of white wine within reach and there's a new episode of Gray's Anatomy on at 8pm, so the evening's likely to end on a high note. Both of my high-lows came from something I read on the internet today. Silly, I know, but I spend quite a bit o
Post a Comment
Read more 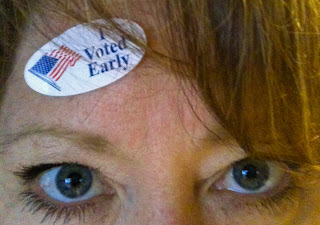 "It's such an insult, thay dunt bauthr." David was born in north central England, but over the course of the past ten years working in Australia, his accent has morphed. He and Walt are stacking wood on the lower deck most likely chipping away at the presidential candidates, tomorrow's election and the electoral process as a whole as they work. I can usually count on David to have an opinion: an opinion about Formula One racing, about the best hot sauce on the market, and about world affairs. He's fairly knowledgeable about current events and passionate about his position. I try to listen but often find the hairs on my arms tingle as I fight the urge to balance the equation with an alternate point of view, the success of which is doomed to failure. And so I shut up (which I might add is not the same thing as being silent). The general election is tomorrow, but we voted early today and were delighted to find an hour and a half of our fellow constituents in line
Post a Comment
Read more 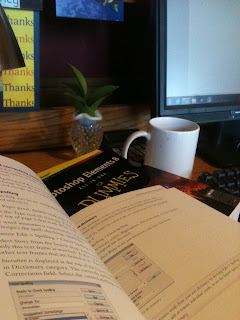 My current contract requires that I edit a technical manual using Adobe's flagship desktop publication application, InDesign. I'm a fairly good technical writer and over the years have become proficient in several text editors. InDesign is not a text editor. In the last three hours, I've watched two how-to videos on Lynda.com, read three chapters in "Adobe InDesign CS6 Digital Classroom" and written one paragraph. The paragraph's content is artfully written but the format stinks because the previous author used 10,206 layers for each object in the document and so I'm having a mental margarita at 11:26 am, letting my thoughts flow effortlessly into the simple text editor provided by Google's Blogger application. Hurrah for simplicity. I graduated from high school in 1971. Although Benjamin Franklin's kite and key experiment in 1752 set the stage for electrically-powered devices to become rampant across the planet, electric typewriters hadn'
2 comments
Read more 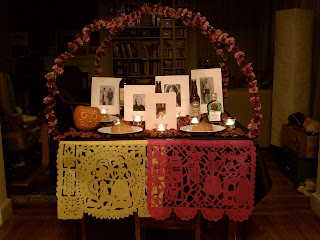 Dia de los Muertos (Barrie/Howard) This morning I launched Facebook to find that my cousin Lee had posted a photo of a "Dia de los Muertos ofrenda" honoring our deceased relatives. I thought it a beautiful tribute and wondered if he had gone all out with the drums and 3-day costume-laden party that typically accompanies the celebration. Since the shrine was in his dining room, I rather doubt it. Although we don't have Hispanic roots that I've been able to locate, I wondered if the Celt's day-of-the-dead celebration paralleled "Dia do los Muertos," All Saints Eve and our current version of Halloween. I found a jackpot written by Jack Santino which can be found through the Library of Congress' American Folklife Center (www.loc.gov/folklife/halloween.html). The Fantasy and Folklore of All Hallows -- Jack Santino (1982) "Halloween had its beginnings in an ancient, pre-Christian Celtic festival of the dead. The Celtic peoples, who w
Post a Comment
Read more
More posts