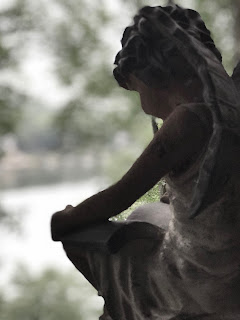 Often while telling a story about a loved one or topic dear to me, the hairs on my arms will raise with a rush of chills and I know I've touched something special. Something that connects me to that energy I cannot explain, that winds through space, time, and the places in between. Sometimes I get that rush when I write. Often, I get that rush when it rains, the roar of thunder and wind and rain in the trees giving form to still air reminding me that movement is life. And death.

I'm watching it rain outside my library window and can't decide if it's a peaceful calm happy sort of rain or the atmosphere shedding itself of an accumulation of dust particles that have just become too heavy to bear and so it's letting go. Maybe that's the problem: I haven't let go.

My great aunt Viola died a month ago yesterday. At 95, I knew her time here was waning, but I miss her stories, her letters, and white-bread sandwiches.

My sweet uncle Thurman died this past Saturday at 86. For the past three weeks, cousin Mark and I had been taking turns to sit with him, rub his feet, and talk about nothing in particular. Last Wednesday was my turn to sit. As he faded in and out of the conversation, I wondered what I could do to pass the time for him. Read? I brought a couple Ernest Gann novels I thought he'd like, but he wanted me to say the rosary. I felt my mother's ghost-like a wool guilt blanket as I reached for the beads and wrapped them around his folded hands. He relaxed and faded off to sleep as I fumbled for words that had been shelved for well over 40 years. I could recite the Lord's Prayer, Apostle's Creed, and Hail Mary from memory, but I've long forgotten the in-between bits.

I reached for my iPad, searched for "rosary for dummies," and hoped that he wouldn't notice if I forgot a glory be here and there. Thank you rosarycenter.org.

Tuesday, I heard that my friend Paul had died. My auction buddy. My lover of long tech talks intermingled with philosophy, politics, gossip, and arguments on how we'd change the world or at least find a decently hot Pad Thai in NW Arkansas as we walked long loops around our workplace during his smoke breaks. I miss my friend.

The storm front has passed but the sky still sports a dull lime green haze signaling that it's not quite finished.  Then comes the rain.